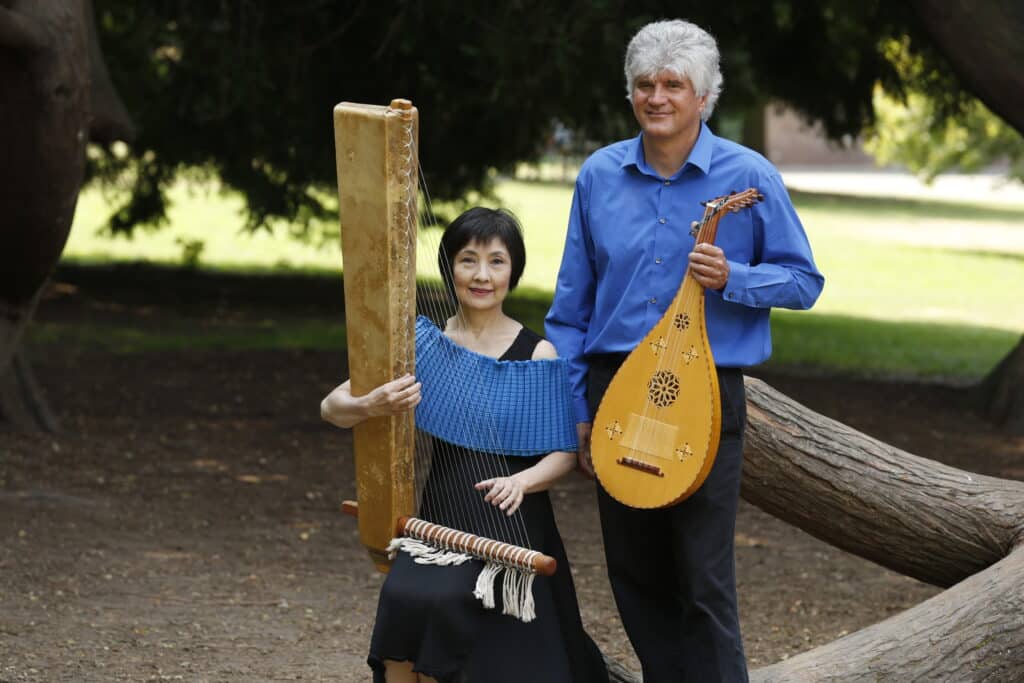 Early—as in early music—has multiple meanings. Ockeghem is early. Hildegard even earlier. Music from the Tang Dynasty is earlier still.

Over the past few decades, historically informed practices have inched forward in time, creeping into the music of Mendelssohn, Brahms and even Stravinsky. The Eurasia Consort takes early music in the opposite direction.

“I refer to that as early European music,” says August Denhard. Denhard is co-director, along with Tomoko Sugawara, of the Eurasia Consort, whose repertoire extends to include ancient music of the Middle East and Asia.

“We’re making a place for these traditions,” Denhard says. “It’s a life work for us. The history we’re interested in is balanced—we can’t have Europe as the center.”

Denhard and Sugawara made a culture-defining trip to Dunhuang, China in 2019, exploring the musical clues found in cave paintings along that historic Silk Road outpost.

“Things moved from the west, from India and from Persia, into China,” Sugawara says. “Dunhaung was an important city on the Silk Road.

“It’s a glorious culture,” she adds. “In Dunhuang there are wall paintings, with lots of music and ensembles and writing. One of the most important sources is calligraphic research.”

“We went to hundreds of caves,” Denhard says. “Tomoko in particular noticed the differences in style. Some periods were more Persian, some influences from India. I walked away feeling like a small cog in a large machine.”

Not only does the music predate western early music, but the approach to tradition varies as well. “In Chinese music and culture, it’s hard to sort out this idea of early,” Denard says. “They have an unbroken tradition. It didn’t go through a period of lost and found.

“We lost our European tradition, and now we look back to find it. Nobody was playing Dowland before 1920. We’re looking back on our traditions with Romantic ears and eyes. In China it’s more of a progression, a lot of respect for history.”

Denhard not only hopes that early Asian music finds more performances, but that early music makes it to more mainstream chamber music stages. He’s based in Seattle; Sugawara in New York; the distance has made any live concerts impossible during the pandemic.

“We are waiting,” Denhard says. “Tomoko is surrounded by wonderful musicians in New York. In the Seattle area, there’s a large Chinese population.

“Our goal is to break into chamber music series and societies,” he says. “Musicians are curious, especially young musicians. Presenters are less curious. They need to please a donor base, and so they need a lot of encouragement.”

The group has commissioned as well, including recent settings by Bun-Ching Lam and Alice Shields, a work supported by a CMA Classical Commissioning grant.

“We’ll come out of the gate ready to perform premieres with our other repertoire,” Denhard says. “Chinese music, Middle Eastern, and medieval. The same musicians play it all, and we pass leadership on to the expert. Rehearsals are culture sharing.

“We’re not creating some ideal,” he says. “If you bring artists from these backgrounds, what do they come up with? We are constantly working on those connections.”