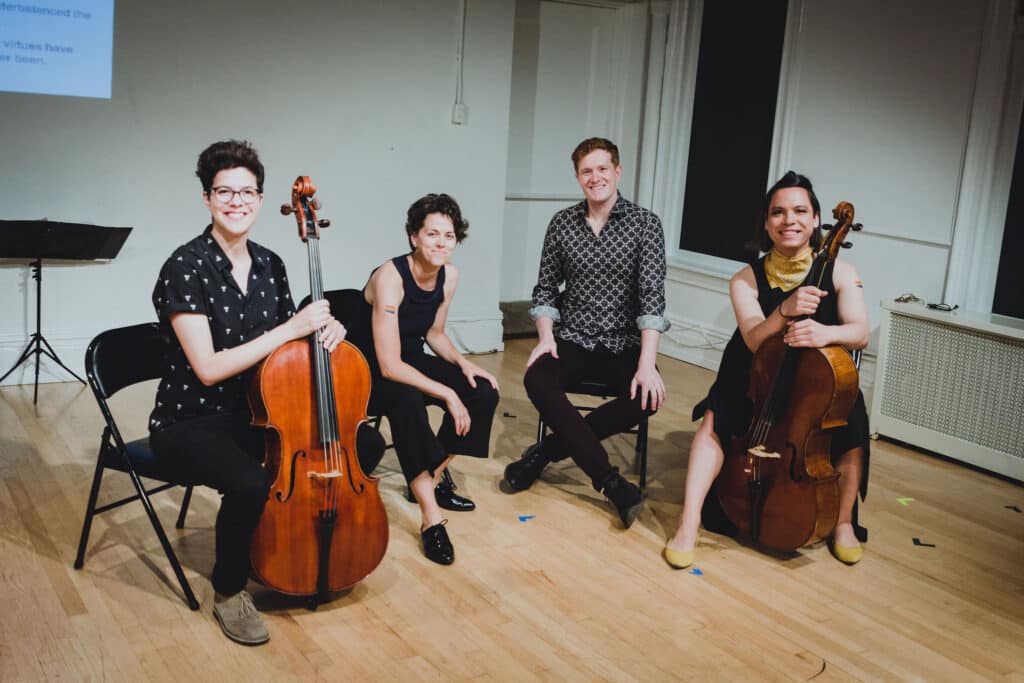 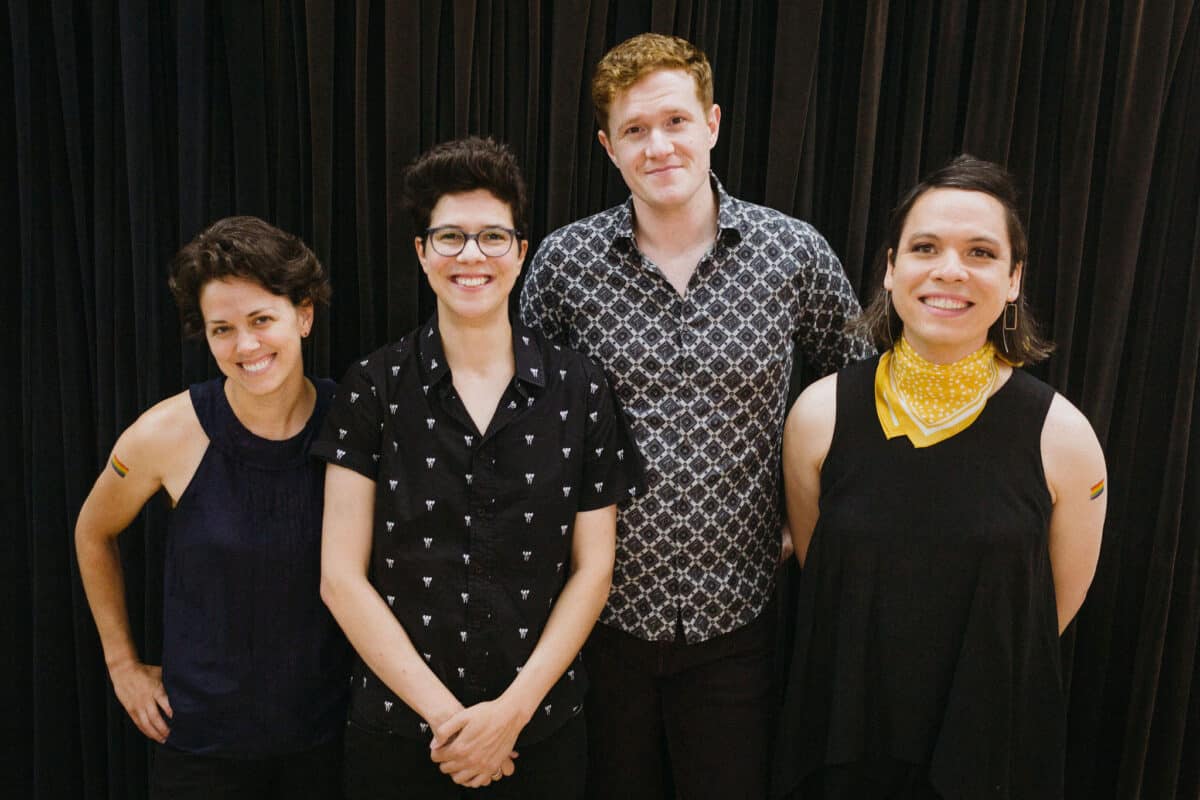 In the hours between lunch and dinner, if we weren’t engaged in solo practice, ensemble rehearsal, or a lesson, we walked along the dirt roads until we came to Weston. The nearest town was about a mile away from the campground, and the closest thing to civilization. There were no restaurants or movie theaters, but we checked our email and purchased blocks of fudge at the Vermont Country Store. On other days we remained at camp, gathered atop the Sitting Hill, our bodies languidly sprawling in the grass, sharing snacks and gossiping, breathing in the sharp Vermont air. At first, Kinhaven Music School seemed like a swing and a miss; my viola teacher had recommended I try it out, rather than Interlochen, the famed performing arts camp that was rumored to be intensely competitive. She was confident I’d have a better experience, and this would be my first summer leaving home for anything more than a week.

But on the first day, I was doubtful. The happy-go-lucky, instrument-wielding white kids, many of whom were returning campers, seemed vastly different from myself. They were easy and natural with one another; I was recently out of the closet and my guard was up, though at dinner I’d bonded with Alex, an oboist from Philly, over a shared love of shopping and Queer as Folk. In the after-dinner dusk, a guy from my cabin invited us to sit with him on the Sitting Hill. We declined, our citified sensibility getting the best of us. “Grass stains.”

It’s impossible to consider the future of chamber music without thinking, simultaneously, about the past. My involvement in it begins with Kinhaven: the rustic classical and chamber music camp I attended for six weeks during the summer after my junior and senior years of high school.

At all times, and from all directions, strains of Mozart and Mendelssohn, Beethoven and Brahms permeated the air. There were no computers, and though we were allowed cell phones, there was no service, so there was no point. Breakfast, lunch, and dinner were all peppered with the ringing of the pay phone in the basement of the dining hall. Whoever heard it ran down the stairs, answered it, ran back up the stairs, and rang a designated bell to announce whomever’s parents had called for them. I had never been in such an environment before. It felt like an exclusive pocket of the world, a utopia where the earnest and joyful pursuit of music ruled the day. Student recitals were Friday and Sunday evenings. We wore concert white and often performed barefoot. I bought peasant tops and women’s boot cut pants in town; I painted my nails, and nobody thought twice about my attire.

I quickly came to love Kinhaven, which is why I eagerly returned the next summer, the last year I was age eligible, just before starting college. My time there felt somehow sacred—and limited. I’d never been more free, more unburdened by the societal ills I was beginning to understand. At the same time, I said I wanted to be a professional violist, but nothing about my life reflected that ambition. Instead, I would be attending a liberal arts college that fall, my interests veering more towards English literature and political science, and away from music. On some level, I think I understood that the version of me that ran free at Kinhaven would not make it in the world of professional classical music.

In the rush to focus so much on the music, there is often little attention paid to the humans who've either composed the music or are performing the music, After a while, that lackof interest begins to look a lot like invisibility.

For this assignment, I’m asked to consider queerness in the future of small ensemble music. This is my first opportunity to write about classical music. It comes at an interesting moment: in the coming months, I’ll be submitting my debut novel to publishers, a novel in which my protagonist is a gender-queer professional violist. Over the phone, I reveal this coincidence to Jules Biber, Andrew Yee, and Danielle Buonaiuto, three of the four founding members of ChamberQUEER, a collective of acclaimed musicians dedicated to programming queer artists and composers, highlighting historically underrepresented queer figures in classical music, and providing an inclusive and intersectional space for artists and audience alike. “Throughout my career, if I ever met other black or queer classical musicians, they were most often violists,” I say.

Jules agrees. “Viola is kind of like the queer of the string instruments. It’s not quite violin, it’s not quite cello, so it occupies this in-between switch-y space that feels really consistent with queer identity.”

That kind of versatility is crucial in chamber music as well. In a musical form that’s conversational in its concept, every musician has responsibility and accountability to the music making. Every player is a maverick, shape-shifting themselves to the part they’re given from the piece at hand. Danielle, Jules, and Andrew are all professional musicians performing in and around New York City, and in some cases, touring the world. They have busy, active careers educating and performing, both chamber music and in orchestras. Part of why their efforts focus on small ensemble music is because as a form, chamber music is inherently welcoming.

“The foundation is democratic,” says Danielle. “Chamber music is open to different skill levels, and everyone gets a say. You have to get consent. I feel it’s the ideal paradigm in which to explore a more affirming model of music making.” She is quick to note that the challenges she’s faced as a queer classical musician stem not so much from lack of opportunity as lack of intentionality. In the rush to focus so much on the music, there is often little attention paid to the humans who’ve either composed the music, or are performing the music. After a while, that lack of interest begins to look a lot like invisibility, despite the fact that as people, we each bring all of our intersecting identities into the room with us when we perform and compose. Andrew likens the traditional chamber music experience to being in a bunch of rooms, separated, with walls erected that prevent people from connecting. “What ChamberQUEER has been for us is an opportunity to build hallways connecting the people in these rooms. Finding ways of connecting people and making different roads available to players.” 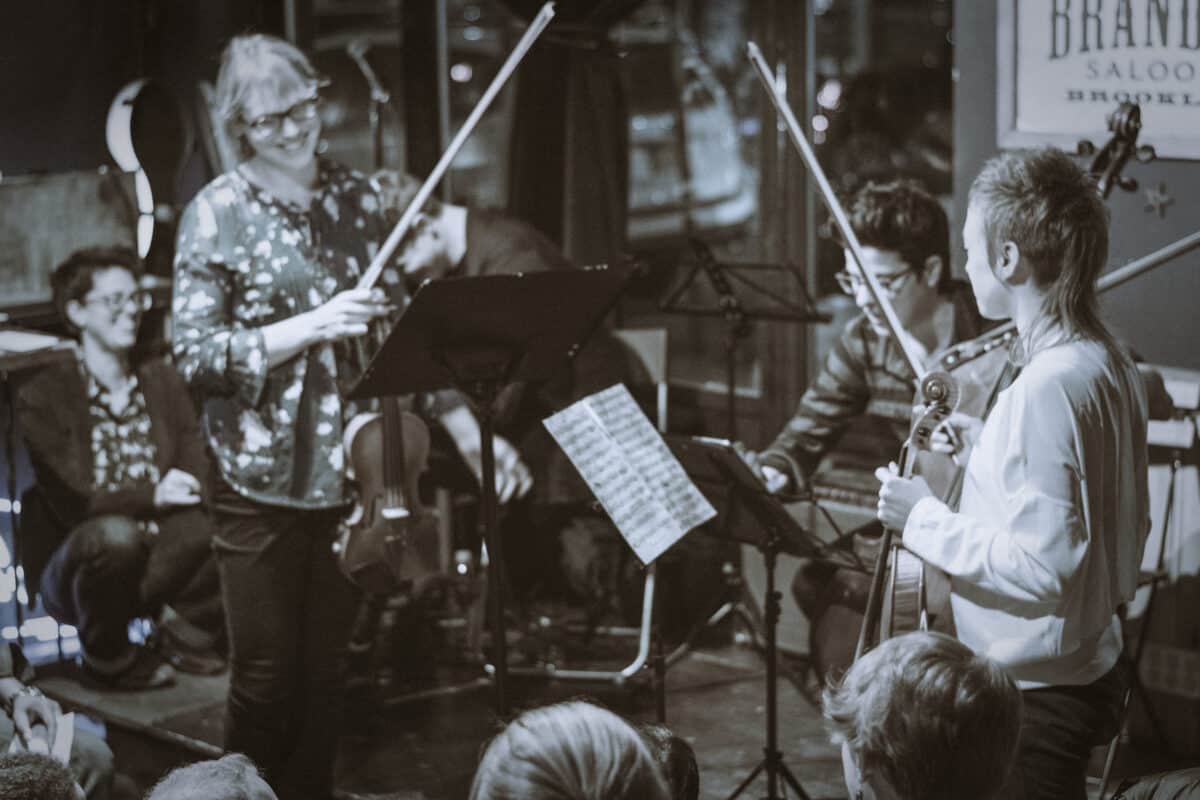 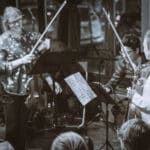 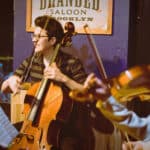 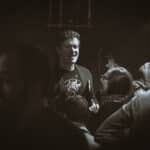 Although only two years in existence, ChamberQUEER has already managed some pretty impressive accomplishments, including ChamberQUEER 2019, a three-day festival held in Brooklyn during Pride month. When in-person festivities in 2020 were cancelled due to Covid-19, they instead staged ChamberQUEERantine, a sixteen-day broadcast featuring over fifty queer artists. They also regularly host sight-reading parties and in-home performances. It’s this deeply communal work, they feel, that most effectively captures the anti-institutional nature of small ensemble music.

In an ideal future, the members of ChamberQUEER see no need for their organization to even exist, at least not in its current iteration. They see a future wherein ChamberQUEER isn’t so much an institution as an ethos that permeates the industry at large. Andrew turns their gaze to the past, to the private salons of yesteryear where women were “permitted” to play chamber music. “My hope is that we move forward looking back and saying, ‘Wow, that needed to be a thing. What a time.’”

“We’re beginning to see, in the last few months, a sudden rush for institutions to diversify their programming, and their collaborators, which means the current climate is finally hitting the classical music world, too,” says Jules. It remains to be seen whether or not the effects of the current moment will be long-lasting, or merely a passing trend. For when these four begin to reimagine queerness in chamber music, it’s less about existing with the approval of prevailing institutions and more about rewriting the rules to better reflect the people making and performing the art.

Throughout our conversation, I am continually transported back to Kinhaven, back to the place where, in my adolescence, I felt most like myself, and where I knew it was safe to be fully and authentically me. The irony is that in such an environment, I didn’t have to concern myself with thinking too hard about who I was. As a queer teenager navigating my family, my social circles, and my school, this freedom was a revelation. I could just be, and just being allowed me to focus more intently upon my playing, and on the intimacy of six weeks spent studying and performing chamber music in the secluded hills of rural Vermont. It also allowed me to envision a future where I didn’t have live my life consumed with garnering approval from cisgender heterosexual people, but for me, that meant finding a career elsewhere.

Every summer, when Kinhaven came to an end, I returned home happy and much improved. But most importantly, I had a better sense of who I was, and who I was turning out to be. The utopian aspect of my time at Kinhaven may not have extended beyond the campground then, and it doesn’t seem to go much further now. But with ChamberQUEER at the helm, it’s easy to imagine a future in which everyone feels welcome, in which everyone has a say.
Danielle sums it up best. “Queer space really means a safe space for people to be themselves. That has to do with gender and with sexual identity, but it also has to do with coming into the space with everything you’ve got. All your intersecting identities are present in your queer self, and all of this is now being reckoned with on a large scale. So, we can teach about anti-establishment practices and de-centralizing leadership, in order to create spaces that are more inclusive from a variety of perspectives. We can be intentional about our programming and our collaborators and that begins to heal some of the harm that’s been done.” 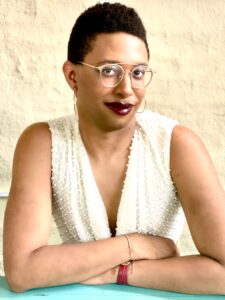 Denne Michele Norris is the Editor-in-Chief of Electric Literature. Her writing appears in McSweeney's, American Short Fiction, and The Undefeated, and has been supported by MacDowell, Tin House, VCCA, and the Kimbilio Center for African American Fiction. She is the first Black, openly transgender woman to be named Editor-in-Chief of a major American literary publication. Follow her on Twitter and IG @thedennemichele. 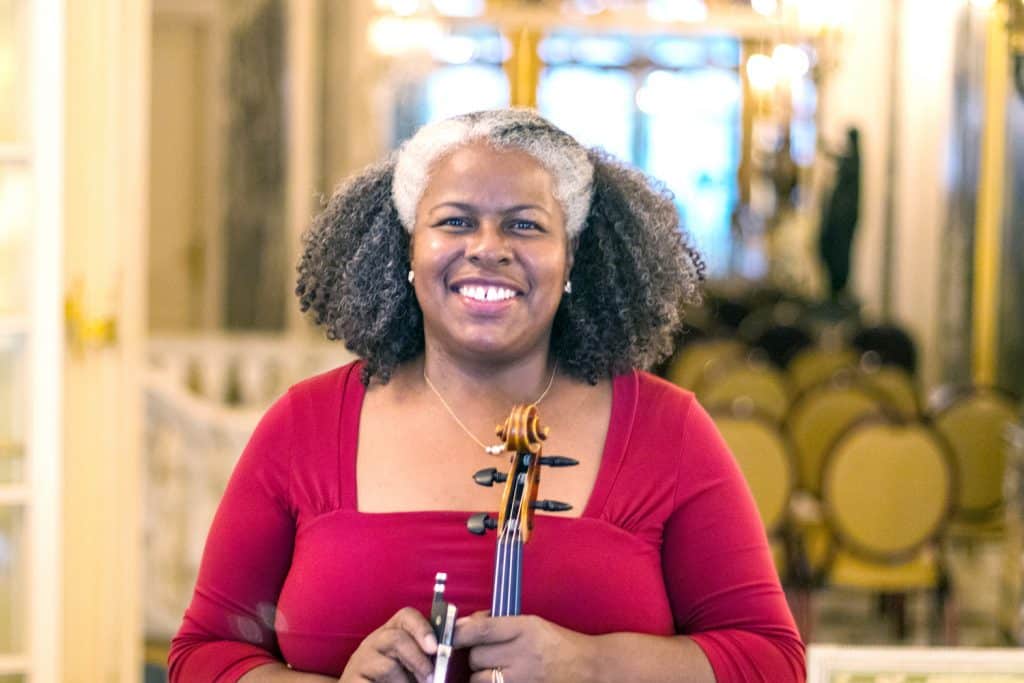 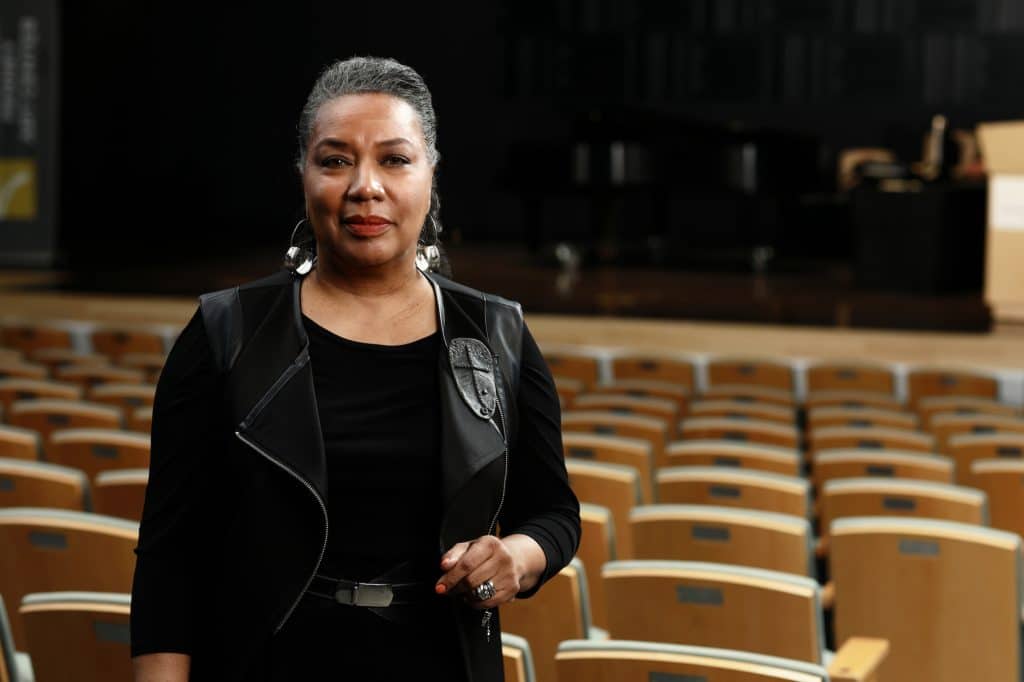 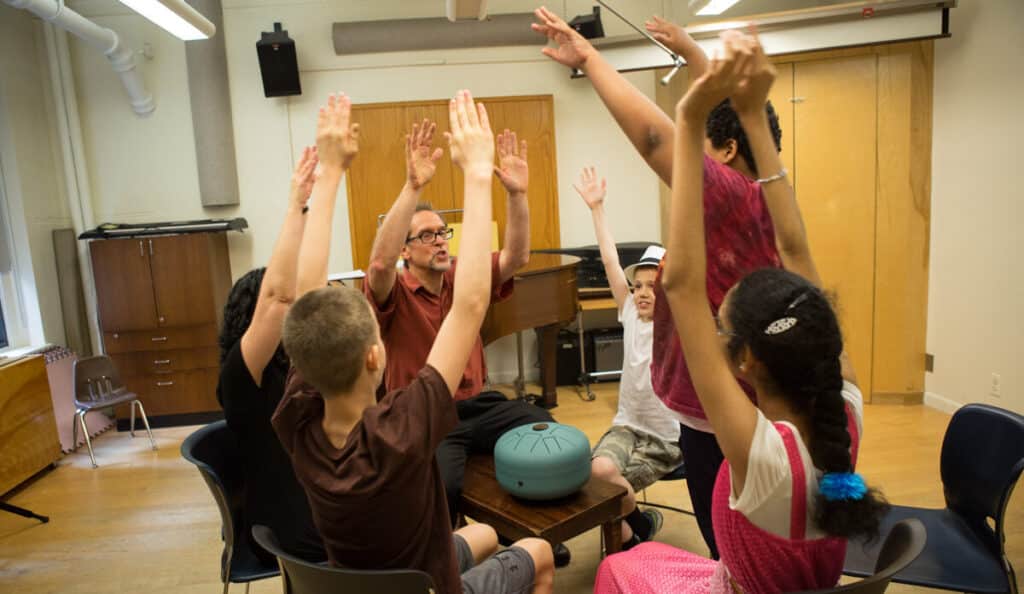