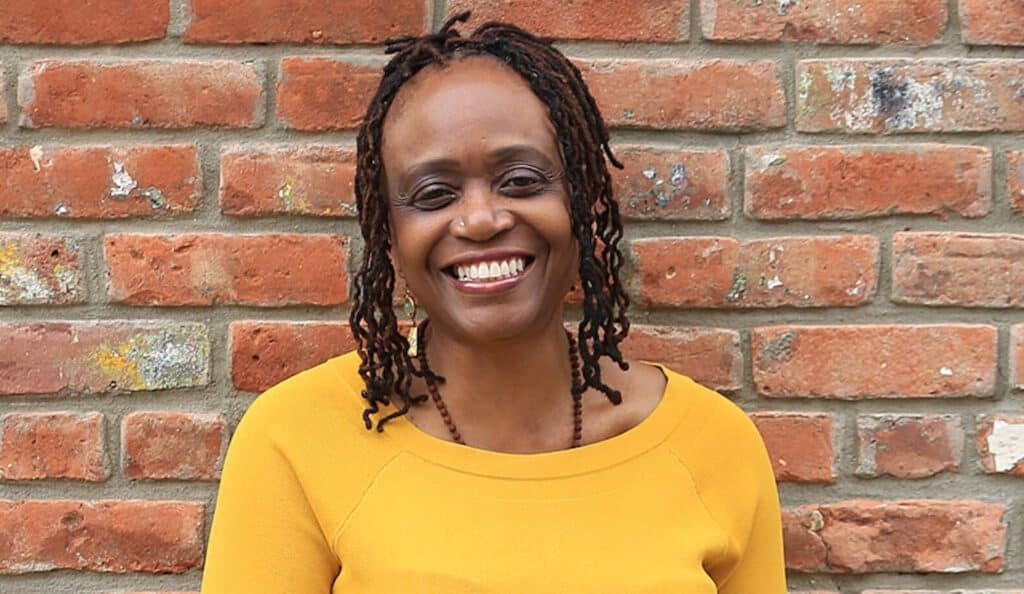 Gwen Laster’s composition “Blue Lotus” is “dedicated to the artistic genius of Geri Allen,” the legendary jazz pianist who died in 2017. Allen and violinist Laster were fellow Detroiters who first met as teenagers at music camp. “She was light years ahead of me with her talent,” Laster says. “She was always just a bright flower to me. So that’s where ‘Blue Lotus’ came from.… I wanted her to be like a lotus flower, to submerge, but to come back up and have her talents blossom and spread to everybody—including me.”

Laster has a way of letting tendrils of her own talent reach in multiple directions. Blue Lotus, her 2021 album of jazz string quartet music (the Geri Allen piece serves as the title track), abounds in personal connection mediated through artistic inspiration—often with social justice in mind.

The album’s latter half is comprised of Laster’s Black Lives Matter Suite, beginning with “Cigarette,” inspired by Sandra Bland, the 28-year-old Black woman found dead in a Texas jail three days after being arrested during a routine traffic stop. Just two weeks before Bland’s death, Laster had her own experience of being profiled and detained by police. The piece, written during repeated viewings of Bland’s arrest video, evokes sirens coming out of nowhere and Bland’s fraught dialogue with police, depicted in conflicting mixed meters.

The suite’s final two movements hit closer to Laster’s Beacon, NY home. At a vigil seeking justice for Samuel Harrell, who died at the hands of correctional officers while incarcerated at Fishkill Correctional Facility, Laster met the deceased’s family. In “Three to Eleven,” she expresses their dignified unity of purpose in graceful unisons. (The title, she explains, refers to the prison shift during which inmates are statistically most likely to be killed.)

In the suite’s third movement, Laster meets the mother of one of the Newburgh Four, a group of men imprisoned after an FBI sting that is widely considered to have constituted entrapment. “Entrapped” tells their story, using spoken word along with shades of traditional Arabic music (to evoke the mosque where an FBI informant first approached the Four) and blues (to paint what Laster describes as the corruption of Newburgh.)

In “Awakening,” written for a worship service in Williamstown, Massachusetts devoted to anti-racism, Laster uses soothing, hypnotic triple meter for music intended to be “open and simple … hollow and breathing, in a way where you could just not be too cluttered, just let things go in.” Very different is “City Echos,” featuring extended cello techniques, funk riffs, and the addition of tabla, together conjuring images of dark, rainy streets and car chases.

Laster performs Blue Lotus with New Muse 4tet, where she is joined by violinist Hsinwei Chang, violist Melanie Dyer, and cellist Alex Waterman. The three actively engage with Laster’s talents: their music includes both through-composed sections and space for improvisation. Laster always takes care to fill in her colleagues on the music’s origins: “I’m always communicating what exactly I’m thinking about,” she says. “So they have an idea of how their voices are going to interact with what I’m feeling … ‘And then you take it from there…’”