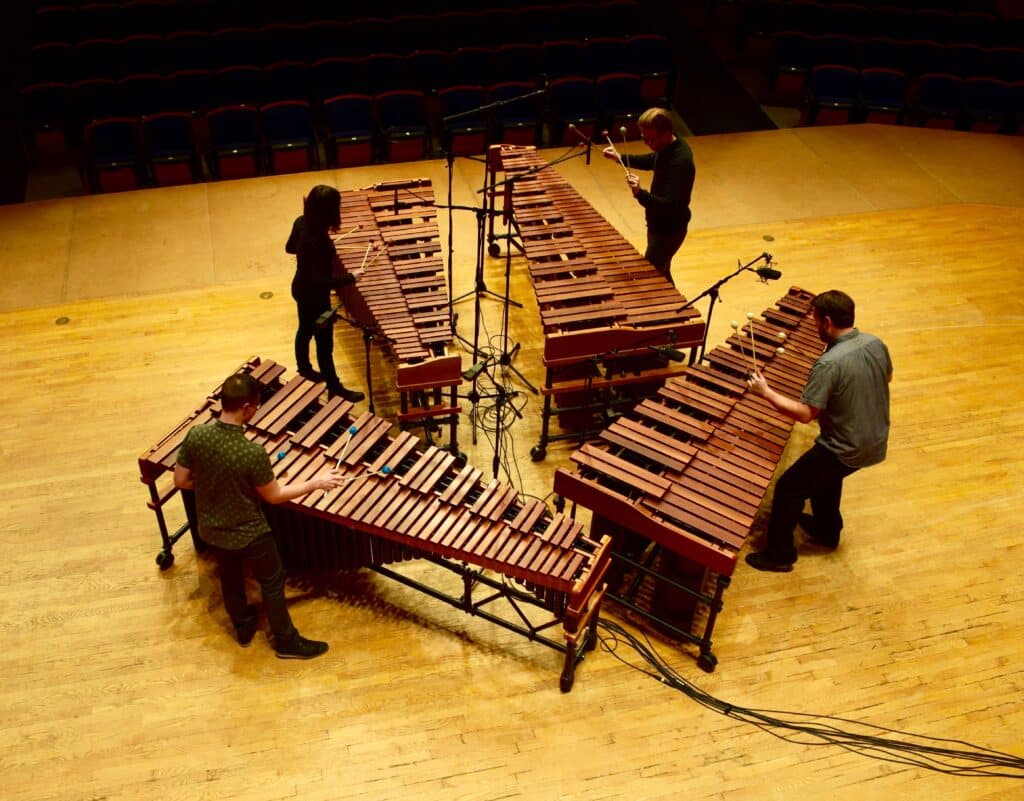 Matthew Coley has a goal: “To be the first full-time salaried marimba player in the world.” He’s getting there.

Coley founded Heartland Marimba in 2014, to promote his instrument. “I always had a penchant for creating something from the ground up,” says the Waterloo, Iowa-based percussionist. “I worked in Chicago in the early 2000s, and I was around entrepreneurial people then. That’s the core of the energy in Heartland Marimba: creating a market for marimba performance.

“String players have a plethora of opportunities,” he says. “But marimba players, coming out of percussion programs, don’t have anywhere to promote their art form.”

So Coley set about creating such a place. He started by organizing a festival—five days of workshops and performances for marimbists—not long after he finished his studies at Iowa State University. “We had such a great time, we did a longer festival, and a weekend, and then a tour,” he says.

That model has persisted. Heartland Marimba has grown to include about two dozen percussionists, and out of those players an HM Quartet and an HM Ensemble were formed. Both groups have taken multiple tours, and, thanks to Coley’s business acumen, are involved in robust commissioning projects, educational presentations, and other opportunities.

Grouping so many marimbists together actually has historical roots. The grandfather of classical marimba, Clair Omar Musser (1901–98), organized large marimba orchestras—once gathering 300 players. (The modern-day marimba is descended from instruments originating in sub-Saharan Africa.) Following Musser’s lead, Heartland Marimba has produced more than 200 concerts in more than 50 cities since its founding.

Coley’s primary goal is to create a sustainable model. “I get great ideas collaborating with composers, with people in the percussion business, in the publishing business,” he says. “The pandemic halted everything, but this year we’re back to being steadily busy. This season the HMQ is up to four full tours.”

Coley has intentionally built a marimba hierarchy in the organization. “We have a roster with tiers,” he says. “Artists can work their way up, and it’s clear to the industry who we are. Around 2018, the HMQ became the core of the organization, and so at the top is the quartet. Then concert artists, then ambassadors, then ensemble players. We engage all those artists in different ways.

“I tell the artists that every concert we do is an audition for the marimba,” he says. “We are always thinking about our programs, so that we can have longevity in the art form.”

Clair Musser’s ambitions from almost a century ago still serve as Coley’s model. “He was organizing these 100-marimba concerts, and partnering with percussion companies,” Coley says. “We partner with Marimba X, JG Percussion, and Beetle Percussion. We also commission, arrange, and publish” Heartland Marimba has dozens of works available on its website, in any number of configurations.

Future growth may take Coley and Heartland Marimba to a larger urban area, perhaps the Twin Cities. “It’s a great arts city, and there’s room for this organization there,” he says of the possibility. “The new music scene, the community connection, having a central space to rehearse, growing our educational programs—it’s a real goal.”